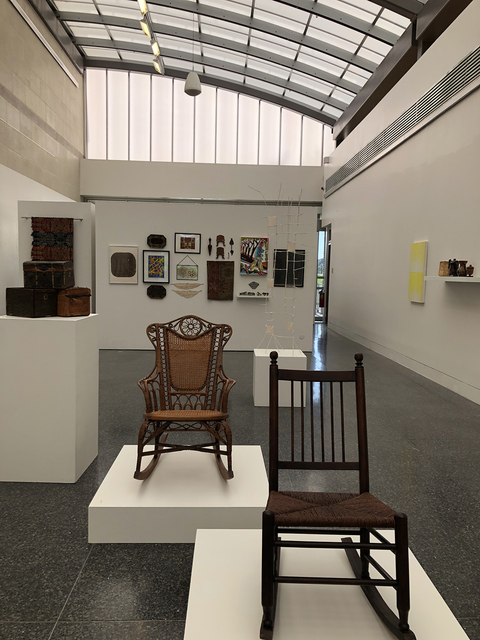 “Plain & Fancy” refers to PA Dutch forms of decorative arts. The plain styles eschewed decoration and nurtured a simple aesthetic of utilitarian objects and a humble, unadorned lifestyle. The fancy lifestyles were those living outside the religious communities, having ties with the outside world, and possibly enjoying themselves. Sometimes, these lifestyles would converge with another and the Plain would become Fancy, and the Fancy would become Plain. These tensions between the insider and the outsider, the worldly and the meditative, and the decorative and the utilitarian continue.

Traditional quilts, rugs, redware pottery, fine china, chairs and kitchen implements and toys will be paired with the contemporary work of six mid-career artists: Leslie Fletcher, Jill Odegaard, Scott Sherk & Pat Badt, Rhonda Wall and Brian Wiggins. Each artist has developed their work in highly personal and unique ways in drawing, fiber, painting, collage and sound. A sense of touch, texture and an affinity to materials can be found in the work of these contemporary artists. They find themselves caught somewhere between the plain and the fancy.

THE ORGANIZER: THE THIRD BARN
The Third Barn is an experimental curatorial project and studio portal. Recent curatorial projects have included the 2 person event Closure if Natureby Seth Cluett and Confusion of Terms by Fredrick Wright Jones, Fall 2018, Recreation by Michael Schumacher (sound art) in the Orchard, 2018, PastPresent: conversations across time at the Allentown Art Museum February-May 2015 and Girl Band, an exhibition of linear abstraction at Muhlenberg College in January 2014, which re-invented itself as Band at the Painting Center in 2016.