The Third Barn has both curated projects and created collaborative works at its Third Barn site and at other locations including the Allentown Art Museum, Frank Martin Gallery at Muhlenberg College, Susan Arnold Gallery at Lebanon Valley College, and The Castle of Evoramonte in Portugal.  For on-site projects see below.  For off-site projects go to TTB (the third barn) OFF-SITE PROJECTS tab or the COLLABORATIONS tab.

AARON ROURK is a multi-instrumentalist, improviser and composer. He performs regularly in New York and elsewhere in a variety of constellations playing flutes, clarinets, saxophones and an ever-growing array of
instruments and sound-makers, both acoustic and electric. He also works in an electro-acoustic format using computer programs to extend and alter the sounds of his instruments.

ARA OSTERWEIL is a painter who works in the traditions of staining and gestural abstraction. Much of her inspiration comes from natural phenomena, such as landscape and weather. Though many of her images come from impressions of her travels to the desolate landscapes of New Mexico, Nova Scotia, Scotland, and Iceland, many more come from her impressions of destinations still unvisited. Filtered through the caprice of the
imagination, storms, deluges, mountains, and lakes appear and disappear in the shifting terrain of apparitional landscapes.
In addition to being a painter, Ara Osterweil is also a writer and scholar of postwar art and cinema. Her writings on contemporary art, experimental film, and world cinema have been published in magazines and journals such as Artforum, the Los Angeles Review of Books, Camera Obscura, Framework, Film Quarterly, Little Joe, and Millennium Film Journal, as well as in the anthologies Porn Studies, Women’s Experimental Cinema, Body Worlds, and Taking Place. Her book Flesh Cinema: The Corporeal Turn in American Avant-Garde Film was published by Manchester University Press in 2014. Although she originally hails from Brooklyn, Ara is currently based in Montreal, where she is an Associate Professor of World Cinema and Cultural Studies at McGill University.

DAVID BAUMFLEK is a visual artist living and working in New York and Montreal. His work crosses genre and medium to evoke intellectual and affective responses from viewers. In addition to video, his practice includes sculpture, installation, and performance. Through their emotional and political investigations of everyday
objects and spaces, his works combine the sparse formal economy of Minimalism with an interest in political and aesthetic theory.
Baumflek’s sculptural and performance work has been exhibited in venues such as Exit Art, Sculpture Center, Wilson Art Museum, Cuchifritos and Art in General. His video work has been shown in festivals and art spaces including Anthology Archives (New York), Festival du Nouveau Cinema (Montreal), VideoEx (Zurich),
Australian Experimental Film Festival (Melbourne), ATA festival (San Francisco) and others. After receiving an MFA from Pratt Institute in Brooklyn, New York, Baumflek was a fellow in the Whitney Museum Independent Study Program in New York in studio art.

EMILY CLIMER is a dance maker based in Brooklyn, NY. The cultivation and exposure of ensemble communication processes in improvised forms—and the challenge of building those layers of meaning in set choreographic forms—is central to Emily’s work. She has shown her dances as part of Sundays on Broadway, Split Bill at Triskelion Arts, the No Theme Performance Festival, and the Vision Festival. Emily has recently performed in projects by Emma Rose Brown, Mina Nishimura, Susan Sgorbati & Elliot Caplan, Tori Lawrence & Co., Tiny Trip, and Tyler Rai. She regularly collaborates with improviser Marie Lynn Haas, as well as teaches Susan
Sgorbati’s Emergent Improvisation. In addition to performing and teaching, Emily writes and edits books for kids when they are first learning read.

RACHEL SHERK is a multidisciplinary artist who works in puppetry, experimental performance, video/sound art, and mixed media collage. Her projects involve place, landscape, vegetation, created mythologies and story. She has created time-based works performed at traditional venues such as 14Y and The Brick Theater, along with making works shown in nontraditional spaces such as at Cornwall Manor Assisted Living Facility, gardens in Brooklyn and beyond, and in country barns in both Pennsylvania and Maine. She has participated in artist
residencies in Italy, Portugal and at the Agate Fossil Beds National Monument in Nebraska. Rachel has shown work both in the States and abroad.
Rachel is the founder of M.A.P.S and has been working with M.A.P.S. KIDS in a storefront in Brooklyn for the last year providing children with an imaginative, art-making space, allowing kids to explore various media in the hopes of sparking deep curiosity about both ideas and process, building creative friendships, and having the freedom to play and invent. Next year she will be working with M.A.P.S. ARTS (a 501(c)3 which works to bring experimental art, theater and music practices to underserved and marginalized populations. 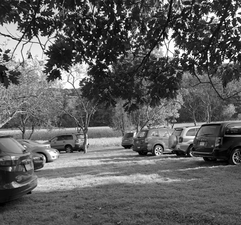 Fall Event at The Third Barn,
Fall 2018:
Seth Cluett: Sound Installation / Performance, Barn 1
Fredrick Wright Jones: Art Installation, Barn 3
About:
Seth Cluett is a composer and visual artist who creates work that explores everyday actions at extreme magnification, examines minutae by amplifying impossible tasks, and tries to understand the working of memory in forms that rethink the role of the senses in an increasingly technologized society.  Ranging from photography and drawing to installation, concert music, and critical writing, his “subtle…seductive, immersive” (Artforum) sound work has been characterized as “rigorously focused and full of detail”.
Fredrick Wright Jones is an Assistant Professor of Art at Muhlenberg College. FWJ says: “I work at the crossroads of function, play and ritual.  This folkloric work is caught in an ethical Middle Passage between dutiful responsibility and post-punk cynicism.” 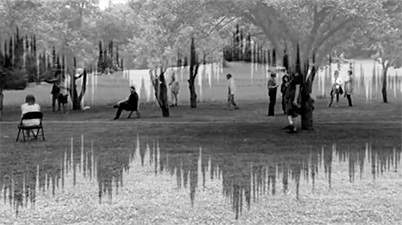 Michael J. Schumacher: MJS is a composer working with all manner of instruments and styles, including symphonies, song cycles, works for solo piano in the minimalist/avant-garde, rock, and ambient styles. He works with electronics, specializing in computer generated sound and processing of acoustic instruments. He uses many instruments including prepared electric guitar, piano, and lap-top computer. Many of his pieces are presented as “sound installations,” a style between composition and sculpture. 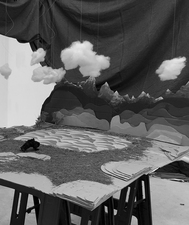 Spacebar
In 2017 the Third Barn hosted Spacebar and supported their pre-production work for an upcoming video.

Installation 1, Performance and Open Studios
The Third Barn had its 2017 debut Installation, open studios and sound/video performance on June 17th in honor of the summer solstice. 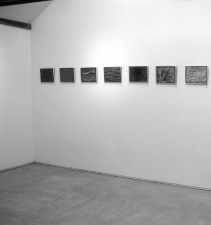 Blue Sounds
Blue Sounds, an installation of painting + sound, now in the Permanent Collection of the American Embassy, RIga, Latvia